Your Emily Blunt Fansite
Welcome to Emily Blunt Fans, your resource for all things Emily Blunt. You may know her from movies such as The Devil Wears Prada, The Girl on The Train, Sicario, Edge of Tomorrow and many more. Emily's upcoming movies include Mary Poppins Returns, A Quiet Place and Sherlock Gnomes. Take a look at the site and we hope you enjoy your visit!
Comments are off
Interviews

Emily Blunt: I Saved Meryl Streep’s Life During ‘Into the Woods’ Shoot 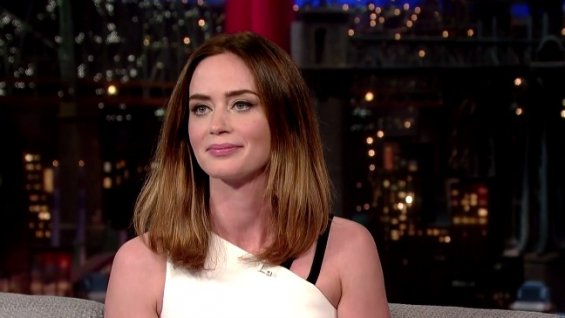 There are hazards to playing a witch, as Meryl Streep learned on the set of Into the Woods.

Emily Blunt, who co-stars with Streep in the film, was a guest on the Late Show on Tuesday, where she told David Letterman that her quick reflexes during the musical’s shoot saved the acting legend from serious injury.
“Meryl Streep’s foot got caught in her cape, and we just started to watch her slowly topple headfirst toward the concrete floor,” Blunt said.

Blunt explained that the film’s director, Rob Marshall, and her co-star James Corden were nearby but didn’t react, and so Blunt sprung into action to catch Streep, despite the fact that Blunt was pregnant at the time.
To put it another way, Blunt said: “I did save her life, yes.”
Watch the video below to find out what Blunt feels Streep owes her for acting as her guardian angel.

Into the Woods Press Conference (Photos)