Comments are off
Gallery, Into The Woods

First “Into The Woods” Still

Disney released a bunch of new production stills of “Into the Woods” including the first still of Emily (as The Baker’s Wife) and her co-star James Corden (as The Baker). We have added the still with Emily in our gallery but be sure to head over to Disney to see the rest! 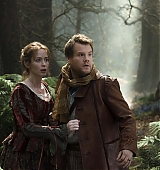 Into the Woods is an unfamiliar take on our favorite fairy tales, and is based on the musical by Stephen Sondheim (a member of our editorial team once played a tree in a production of the show, so we’re extra excited for this movie). The film comes to theaters December 25.

First “Into The Woods” Trailer