Welcome to Emily Blunt Fans, your resource for all things Emily Blunt. You may know her from movies such as The Devil Wears Prada, The Girl on The Train, Sicario, Edge of Tomorrow and many more. Emily's upcoming movies include Mary Poppins Returns, A Quiet Place and Sherlock Gnomes. Take a look at the site and we hope you enjoy your visit!
Published on In
Gallery Interviews Magazine Alerts

The LA Times have released a new interview and photoshoot with Emily! I’m not a huge fan of these new pictures but Emily can pull anything off so she still looks beautiful! There is also a video interview which you can watch here, screen captures are in the gallery. 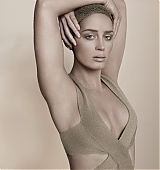 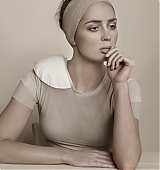 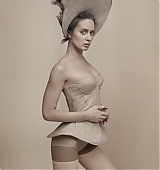 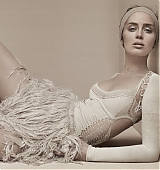 Just what is it about Emily Blunt? The British beauty seems to specialize in taking borderline-unlikable characters and imparting them with unforgettable vulnerability and charm. Think of her pin-thin, prickly but ultimately terrorized fashionista in The Devil Wears Prada. Or her damaged and aimless little sister in Sunshine Cleaning.

With the slightest dip of her eyelid or the momentary quiver of the cleft in her chin, Blunt manages to reveal emotional dimensions beyond the depth of many actresses twice her 26 years. Blunt’s characters don’t just support scenes—they steal them.

With her new turn as the titular queen in The Young Victoria, Blunt proves she can carry an entire picture. She was up for a Golden Globe for Best Actress in a Movie Drama for her portrayal of the iconic monarch before her “We are not amused” dotage, and the Oscar buzz is already mounting. But that doesn’t mean she wouldn’t take on the occasional genre project. Her next appearance on the big screen pits her opposite a monstrous Benicio Del Toro in a reimagining of The Wolfman, one of a dizzying five completed Blunt movies slated to debut between now and March 2011.

She will have to carve out time for a wedding, though—she and John Krasinski of The Office got engaged back in August.

Leslie Gornstein: You have said you’re drawn to people who are a little off the wall. How does one go about finding the off the wall in someone as hyper-managed as an English queen?

Emily Blunt: I never felt that Victoria was off the wall. I think I’m drawn to characters with complexity or who are under duress in some way and have some conflict going on. In this case, it was a character who had so much to draw from, and there were so many challenges in playing her. I loved the sense of the performance, of her being queen and the private person behind closed doors.

You’ve also said you draw inspiration for your characters from real people you know, calling it “combining, not stealing.” Do these people recognize themselves in your work? And then who has provided you with the best “combining”?

It’s funny, like I feel I can’t give away names. It’s usually other people who say, “I think you are playing so-and-so.” It’s quite a subconscious thing. If you’re very open to watching the world go by, with people’s different tics, you absorb it all without realizing it and find ways to put something into your character. I’m not sure I’m always aware I’m mimicking someone. With Victoria, it was a different story. She’s actually the character I’ve played that I have understood the most. There was a wealth of knowledge to draw from. Her voice was so emphatic and unique. I didn’t base her on anyone but the person who came alive in books and diaries.

Gossip reporters are often complaining that there are disappointingly few paparazzi shots of you doing anything naughty. Is there an art to staying off the tabloid radar?

People are like, “We want to see her fall on her face not wearing underwear.” That sounds just awful. They can clamor for those pictures, but I am determined not to reveal any of that. I did manage to smash the front of my Prius the other day. I hit a curb.

Did the paps nail you?

I don’t think so. But they are sneaky. They will get you when you least want to be gotten.

During shooting for The Devil Wears Prada, you had a habit of showing up on set whether you had a call time on that day or not. Is directing in your future?

It was my first really big feature. To see things move like a well-oiled machine is so interesting. But I was lonely as well. I knew no one [in the area] apart from people on the set—and it was a riot. I was in heaven every day working on that movie.

I found a headline from that year. I’ll read it, and you give me your reaction: “Devil Wears Prada Forced Emily Blunt to Emaciate Herself.”

Yeah, that’s another story I thought got blown out of proportion. With Hollywood, you say one thing, and that’s what can happen. I was definitely encouraged to lose weight—not because I was overweight but because I was playing a character who was edge-of-ill thin. She literally doesn’t eat. I couldn’t turn up with love handles, but it wasn’t like doughnuts were snatched out of my hand.

You admire the Denches and Mirrens, of course, but you really desire to be like Cate Blanchett. Why?

Well, I want to do my own thing and not emulate anyone else, but I am fully admiring of what Cate has done. She is so compelling to watch, so chameleon-like, that she is able to lose herself in any part. And there is no vanity—not a shred of self- consciousness. There are people out there who make really brave choices. That’s why I singled out Cate. That’s also why I like Benicio Del Toro and the choices he has made.

Is he the main reason you signed on for The Wolfman?

Yeah, Benicio and Anthony Hopkins. Those two guys are top of my list—favorite actors, favorite performances. When I heard they were both doing it, it was a double-whammy of intrigue. I knew it was a commercial script, and I knew exactly what I was getting into. I actually liked the script. Sometimes it’s not only about the story, the character, the director. It is often about who I am working with. You really are only as good as your costars.

I heard you once instructed a photographer not to airbrush you—that can’t be right, can it?

I told him not to make me thinner. I hate when your legs are three times the length they actually are. I heard they could raise your nipples if you have a slightly see-through top, lift your bum—they can do everything. I can understand there are things like shadows they need to fix after a shoot, but it’s unfair to represent an image of yourself if it’s not true. They’re gonna see what you look like on film anyway, so why try to cover all your wobbly bits in a photo?

Two years ago, you were presented a Golden Globe by P. Diddy [for the BBC TV drama Gideon’s Daughter], but at the time you said you had not been invited to any of his parties. Has he come to his senses yet?

I still have had no invite. Very disappointed. [Heaves an ironic sigh.] It’s a big chip on my shoulder that I have not been to any of his parties—P. Diddy, Diddy Puff. But he was super nice to me. And he does look sharp, that guy. Doesn’t ever go wrong with a suit.

So many rising actresses lean on romantic comedies to build their résumés. Your CV is so much more diverse. Tell me about your search process.

It’s about trying to find those scripts that surprise me, that have a fresh spirit. There really is a dearth of material out there, especially for women. Some romantic comedies are great. Everyone is trying to rewrite When Harry Met Sally—which is the best—but no one has come up with it yet. I just find clichés a bit tough to swallow.

Clichés can buy you a very nice house in St. Barts.

Victoria had a horrible temper—feisty and stubborn and determined. Gwen is an icon of purity. She’s willing to see the goodness in everyone, to extend a hand for everything. She’s quite a strong girl, a damsel in distress to Benicio’s Wolfman.

It’s actually really fun. Who gets to dress up like that? I usually restrict myself to jeans and flipflops, so I find the whole thing very exciting. I think if you go to the awards, you have to be willing to understand that some people are going to loathe your dress. You have to allow yourself to be torn apart. It’s exciting to do something so out of the rhythm of your normal life.

Did you hit all the swag suites?

No, that’s something I find repellent. They take your picture as you stand there with some gift you never would have gotten before. That’s the thing with Hollywood—the more success you have, the more stuff you get for free. I find that morally rather strange.

I know you have a ton of projects going on, so thank you for your time.

Actually, right now I’m working on a project called Sitting on the Couch and Eating.

Bravo—break a leg with that.

I just ate the cheesiest, creamiest risotto—I put too much parmesan in it.

That’s what I thought! It went down pretty well, I must say.