Comments are off
Edge of Tomorrow, Gallery, Interviews

Emily sat down with USA Today while promoting “Edge Of Tomorrow“. We missed this interview before but you can read it below and we also added the high quality photoshoot in our gallery. 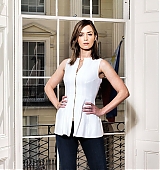 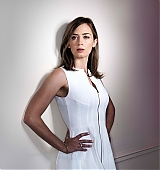 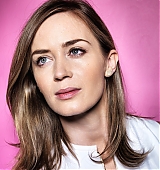 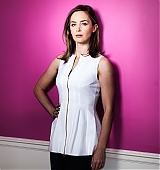 If there’s one thing above all others that is at the core of Emily Blunt, it’s her family.

There’s her infant daughter, Hazel, currently in Boston with dad John Krasinski, Blunt’s husband since 2010. Mom and daughter have only been apart a day, but, says Blunt, “It’s hard the first time. It’s strange. She’s always with me. She’s ridiculously cute. It really is the best thing. Everyone says that it is, and it is.”

She’s ferociously proud of her literary-agent sister Felicity Blunt, who got married to actor Stanley Tucci after Emily introduced them; during an interview in 2012, she recommended one of her sister’s clients, the thriller scribe Tom Rob Smith. When Blunt was in London, working on her current release Edge of Tomorrow, Tucci cooked his famous risotto for his sister-in-law, a memory she still visibly savors. “He’s an amazing cook, and that’s how he and my sister fell in love,” says Blunt.

And even though the only thing standing, at this precise moment, between Blunt and a quick drive north to her daughter is this interview, she’s calm, gracious, thoughtful and makes sure nothing feels rushed or curt. She lives quietly, outside Los Angeles, with her husband and child, an existence that, jokes Blunt, is perfect because it costs paparazzi too much in gas to bother following her home most of the time.

Professionally, she’s at a high point, with two very different but equally notable films out this year: the Tom Cruise action thriller Tomorrow, opening Friday, and Stephen Sondheim’s dark fairy-tale musical Into the Woods, out Dec. 25.

For Blunt, who generally works out a lackadaisical two or three times a week and previously sang only in the shower, both films proved to be very different but equally vital defining moments.

“I try and do something unexpected, something that is ultimately very challenging,” says Blunt, better known recently for more intimate projects like Your Sister’s Sister and The Young Victoria.

And that explains why she opted for brutal battle scenes opposite Cruise, famous for his unrelenting work ethic. “The thought of this I found intimidating. Every action movie I read, it’s the girlfriend role. I have nothing against it, but it’s not what I wanted to do. If I do an action movie, I want to do some action,” she says.

She appears delicate and refined in person, but it’s not who Blunt is, says director Doug Liman.

“She’s got more edge, in the best possible sense of the word. She’s a powerful, strong person,” he says. “But physically, she went through training on par with what I put Matt Damon through to get ready for The Bourne Identity. She had the huge advantage of having Tom Cruise as a training partner. I’ve never seen anyone work as hard physically preparing for a role as Tom Cruise. She started training three months before she even showed up in England to start rehearsing.”

The two got along immediately, with Blunt saying Cruise loved having his British co-star “take the (expletive) out of him” — meaning, tease him. Cruise, calling from Los Angeles, returns the compliment. “You can’t imagine anyone not getting along with Emily. What you see is what you get when you’re talking to her. She’s very bright, obviously. Very articulate,” says Cruise, who is looking for another project for them to do together. “You want to hang out with her.”

Perhaps it’s her sharp, yet never mean, sense of humor. Blunt, even operating on little sleep after a 24-hour promotional marathon, can lob one-liners back and forth faster than Serena Williams. “I met her when she was 22 and I thought she was older than she was because she’s so mature. I was shocked when she told me how old she was,” says Tucci, who appeared alongside Blunt in 2006’s The Devil Wears Prada. “We loved to laugh together and we became friends. We share a sense of humor. She’s one of the funniest people ever.”

A topic Blunt doesn’t find amusing: protecting her newborn from intrusive camera lenses. Working opposite Cruise, one of the world’s most famous people, was eye-opening for the actress. Since the birth of her child — and her unwillingness to sell baby pictures, or allow paparazzi to shoot Hazel — she’s gotten a taste of just how invasive celebrity can be. Blunt is loathe to complain, saying she realizes just how fortunate she is, but she’s also heartened by seeing people like Cruise being able to go out to dinner and “zen out,” as she puts it, when faced with endless camera lenses. She’s not there yet.

“When I was going through the airport to fly to Europe to do this press tour, I had her in the BabyBjörn. And we had some security. There was a camera coming at me and the camera hit my hand, and my hand was shielding that tiny little head. The fact that a massive object smacked me in the hand, the only thing between a baby’s head and a camera, I was astonished,” says Blunt. “I had a blanket over her. What are they going to get? That kind of insanity is always going to intimidate me a bit. But I don’t want to let it keep me inside.”

She’s also coming to terms with what it means to be a first-time mom and going back to work this summer on the drama Sicario, with Benicio Del Toro.

“It splits your focus, obviously. I do love my work. I’m a little leery of going back to work in a way I never used to be. … But I think it’s a good thing to do both. Having a baby will make me very specific about what I choose to do,” she says.

Speaking of, there’s possible marital drama standing in the way of her soaring career. Her husband’s as-yet untitled Cameron Crowe film conflicts with Into the Woods. “John and I both have movies coming out Christmas Day, so we’re going to duke it out. We’re going to have separate Christmases of course. See you whenever!” giggles Blunt.

First “Into The Woods” Trailer